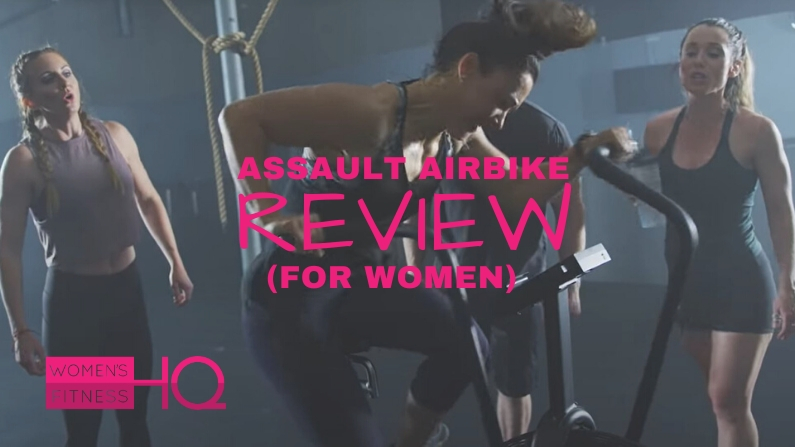 Right now, having high quality home workout equipment is more important than ever. With gyms all over the world closed up, it’s crucial that you have what you need to get a good workout in. An airbike is perfect for the current need – they don’t take up a lot of room and they give you a killer full body workout. And when it comes to air bikes, there’s none better known than the Assault AirBike. So read all about it in our Assault Bike review by women, for women.

What is an Assault Bike?

The Assault AirBike is different than road bikes or indoor bicycles. That’s because instead of a wheel, it has a giant fan in front. The fan generates insane amounts of wind resistance as you pedal. In fact, the harder you peddle, the harder it gets, On top of that, the handles move back and forth in sync with the pedals. So you’re also pushing and pulling as you pedal, meaning that your upper body is getting a balanced workout too.

It’s kind of like mixing an elliptical with an exercise bike. Sort of.

Between pedaling and pushing and pulling as you go, the Assault Bike gives you a workout like no other. It’s why so many people have a love/hate relationship with the bike. The harder you can work, the harder the workout gets.

You simply can’t beat it.

Below we will go into the pros and cons of the bike in our Assault AirBike review.

What makes an Assault AirBike different that a regular exercise bike? Well, a lot, actually. A normal exercise bike is essentially just a bike stuck to the floor. It gives you a cardio workout while working your legs a bit – namely your calves.

However, an AirBike gives you a full body, absolutely brutal workout. The fact is, you just can’t help get a badass workout on this bike. There’s no coasting. No just putting in the time. That’s largely due to the 25 inch steel fan taht provides you with extreme resistance. You have to work to get it going, but the more you work, the harder it gets, all in proportion.

Honestly, we’re hard pressed to find any cons. However, if we absolutely must, here’s what we’d say:

Is the Assault AirBike a Good Tool for Women?

Absolutely. The Assault AirBike is a CrossFit staple. And did you know that 60% of CrossFitters are women? That’s a whole lot of women using Assault bikes. And of course, that’s not counting those in other types of gyms or those using them at home.

The fact is that the Assault Bike gives a fantastic full body workout, as well as an intense cardio workout. This allows you to burn fat and chisel muscle all over. And it doesn’t matter how strong you are – what you put in is what you get out of it. Woman or man – doesn’t matter!

However, it’s probably worth noting that the nickname for this bike is the “Ass Bike.” So if you’re looking to work on yours, well, time to get to work on the AirBike!

Think you might be ready to take the plunge and commit to getting a brutal workout in your own home? Check out the Assault AirBike on Amazon here now!

Not looking for an AirBike? Then you might be interested in our article on best Peloton Alternatives.

Decided on an Assault Bike? Then check out this sample Assault AirBike workout for women!

Warm Up: Before getting on your Assault Bike, we recommend warming up to get blood flowing and loosen up your joints and muscles. We recommend doing 2-3 sets of downward dog to cobra, high knee run in place, and butt kicker runs.

The Workout: The workout is easy to follow, but certainly not easy to do! You’re going to ride all out as hard as you can for 20 seconds, then take a 10 second break. Repeat 8 times. Careful getting off the bike – this tabata style workout isn’t very long, but if you do it right, you’ll feel completely wiped out at the end! Can’t make it through? Try increasing your rest intervals to match your sprint intervals to start.

As always, make sure you consult a doctor before beginning any workout regiment!