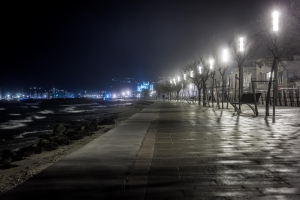 If you get up early enough, you’ll see the sidewalks and tracks filled with morning warriors, jogging off the calories from the night before. But the problem is…well, getting up early enough. Let’s face it, we aren’t all wired to hit the pavement at 5 am.
That said, is there really anything wrong with working out at night? Let’s take a quick look at the common claims against it:

Reasons Working Out at Night May Be Right for You

It’s possible that a nighttime workout just makes more since for you.

1. It’s a great way to wash away the stress of the day. A long day of work followed by a commute in rush hour traffic can make it difficult to unwind after a long day.

2. It may be a better fit for your body’s natural rhythm. If you’re naturally more functional at night, trying to force yourself to workout in the morning may hurt more than help, throwing your body off its natural pattern.

3. If you like it more, you’ll stick with it. I’ve seen it time and time again. Someone who isn’t a morning person setting herself up for failure by saying “tomorrow I’m going to wake up at 4:30 and run!

4. You have more food in your system to fuel your lifts. If you’re lifting, you aren’t going to have as much energy flowing in the morning to make those big lifts. But if you eat right throughout the day, you should have the chemical fuel necessary to put the weight in the air.

Do you workout at night? Talk about it in the replies!

FITNESS DEALS IN YOUR INBOX

WANT TO GET MORE FIT?

Join thousands of women. Sign up for FREE and stay up to date on the best fitness tips, deals, news, and more!

You have successfully joined our subscriber list. Keep an eye out for your first email!

Working out can do wonders for your physical health and is also quite beneficial for stress management; however, those three-figure monthly gym members aren’t something…

How To Get A Flatter Stomach Practically Overnight